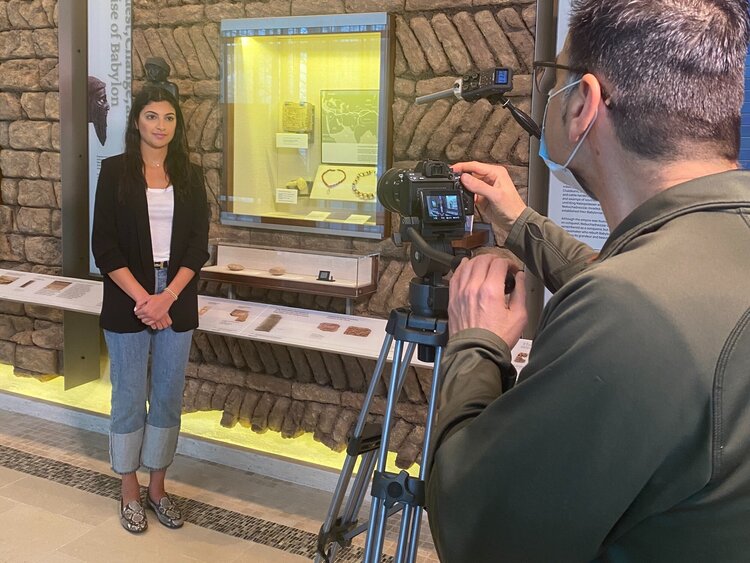 Dealing with a worldwide pandemic, the Chaldean Cultural Center (CCC) decided they need to highlight the Museum’s offerings in a new way and developed a new concept called the “Museum-Minute.” It involves filming segments featuring community members talking about various exhibits. The concept was designed “in order for our one-of-a-kind museum to stay active and relevant,” states Weam Namou, Executive Director of the CCC.

The first segment features Renna Sarafa giving a brief history of a school tablet displayed in a section of the museum called Ancient Gallery. Renna is a senior who will be graduating from Michigan State University this year with a major in Finance and minor in Leadership of Organizations. She chose the school tablet as her Museum Minute artifact because she “found it fascinating how students learned in our origin country.” Renna also shared, “It is very interesting to see how our education system has advanced from note-taking on stone to learning via Zoom online classes.”

Like many others, Renna believes that her generation has not had enough exposure to culture. “The Chaldean Cultural Center is remarkable,” she shares. “It is an excellent place for us to learn about our community, religion and culture from the beginning days until now.”

The second segment features Martin Manna, president of the Chaldean American Chamber of Commerce (CACC) and the Chaldean Community Foundation. (CCF) Manna chose to highlight the passport of Tobia Lucia (later renaming himself Tom George), who arrived in the US in 1926 as the first of his family. “The patience and perseverance required for this type of immigration is something our forefathers had in abundance and is something we can never repay,” shares Manna. “Our success here is an attempt to make good on the promise of their hopes and dreams.”

“I love the idea behind the Museum Minute and think those will bring a lot more attention to the Museum and Cultural Center to people on social media,” says Sarafa.

Weam Namou is hoping that she’s right. “This is how we will continue to keep our heritage, culture, and language alive,” she adds.

Atheel Mary was born in Baghdad, Iraq on July 15, 1959 to Chaldean parents, Dr. Nouri Yousif Mary and Nakiya Yousif Tomina. They immigrated to the USA in 1961 and settled in San Francisco, later moving to Connecticut in 1963 and then to New York in 1965.

Atheel was born deaf.  His father, Dr. Mary, who was the Dean of The College of Pharmacy, Long Island University in New York, wanted the best for his only son. He moved his family to New York because of the opportunity to send Atheel to Lexington School for the Deaf, the best and largest school for the deaf in New York State.

Growing up with communication challenges did not hinder Atheel or prevent him from charting a path to his professional growth and success. Today, Atheel is an accountant with the Department of Defense Financial and Business Operations Division and makes frequent presentations to other US government departments using different methods of communication. He holds an Associate of Applied Science degree in Accounting and a Bachelor of Science degree in Business Administration from Rochester Institute of Technology.

In his presentations, Atheel discusses typical misconceptions about deafness and hearing loss, ways to effectively communicate with deaf and hard of hearing individuals, strategies for group interactions and meetings, and the role of a sign language interpreter, and assistive technology.