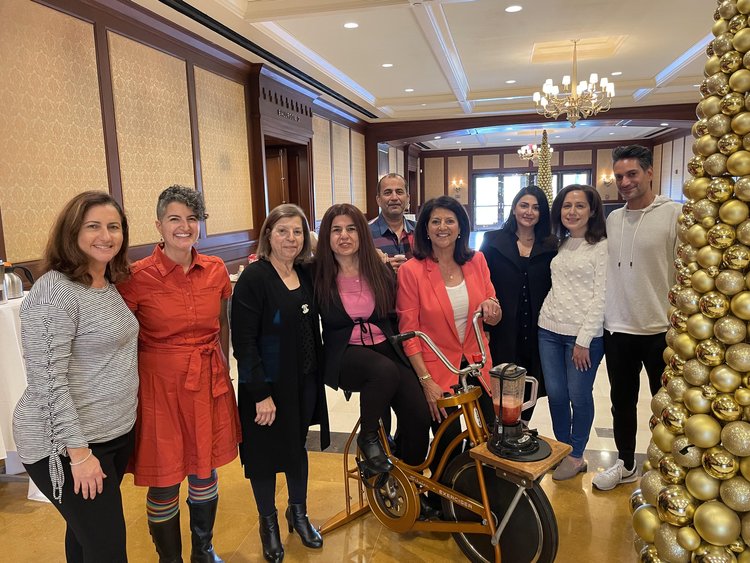 The Chaldean Cultural Center (CCC), located inside Shenandoah Country Club, received a state enhancement grant worth $150,000. The grant will help the center further its mission of celebrating the extraordinary history, arts, traditions, and contributions of Chaldean people from ancient times to present. The CCC, which is in its 18th year of operation, features several rooms decorated with chronological historical periods.

On November 4, the 6th grade class from Our Lady of Sorrows toured the museum, the first large group to do so since the COVID-19 pandemic began. Weam Namou, the CCC’s executive director, said this is exactly the kind of education the grant will be used for. “We’re doing more outreach so we can bring schools to experience this,” Namou said.

The museum tour was one small part of a larger field trip for the students. They completed four other activities which included learning a traditional Chaldean dance, spelling their names in Sureth, learning about ancient Chaldean foods, and watching a documentary on Chaldeans in Detroit.

The first room in the museum depicts ancient Chaldean history and traces our roots back to Sumerian culture, one of the earliest civilizations in history. Sumerians are credited with inventing many ancient technologies including the wheel, writing, arithmetic, geometry, irrigation, and beer. The exhibit contains a full replica of the Code of Hammurabi from the Louvre in Paris.

The museum then moves on to the Biblical age, with sections about the Assyrian and Babylonian Empires. Around 600 BC, a Chaldean dynasty ruled the Babylonian Empire, including Nebuchadnezzar, a figure made famous from the Bible and known for conquering Jerusalem twice.

The next room shows the historical relationship between Chaldeans and Christianity. Chaldeans were some of the earliest Christians, converted by the Apostle Thomas in the first century. The modern Chaldean language, Sureth, is a descendant of Aramaic, the language of Jesus. According to Chaldean tradition, the Magi passed through Chaldean villages after Jesus’ birth.

The historical journey continues, showing village life and the reality of being a Christian minority in a Muslim country. Barter economies in villages formed tight-knit communities and strong family bonds.

“In the 20th century, increasing numbers of Chaldeans left their villages. Yet, the villages didn’t leave them,” one caption says. “The traditions and sense of community nurtured by village life endured, preserving a distinct sense of identity.” In agricultural communities like Chaldean villages, work and normal life overlapped seamlessly, which offers a clue to how Chaldeans ran their businesses since coming to Detroit.

Finally, about one-third of the space is dedicated to modern Chaldean history in Detroit. It shows passports and immigration documents from some of our original community members. The CCC shows how, over the years, a community of small-village immigrants came to own and operate so many of Detroit’s grocery and party stores.

Ban Kizy, one of the CCC’s board members who volunteered on the field trip, said the museum is invaluable to remembering Chaldean history and preserving our culture. Inside, her and her mother’s passport photos adorn the digital wall of historical records.

Judy Jonna, the CCC’s Chairwoman, said the grant would have been impossible to get if not for the help of Klint Kesto and Michigan Senator Jim Runestad.

In a letter, Runestad called the CCC a “treasure not only within the West Bloomfield community but also for the many students and residents across our state and beyond who are blessed to learn from the stories it shares.”

The CCC plans to use the funds to expand several of its programs and to restart regular visitations from large groups, like the OLS field trip. The CCC also has plans for a mobile museum, which involves presenting the content of the museum directly in schools. Namou said they are working on a fully digital presentation that teachers could show to their students all around the country.

After the COVID-19 pandemic closed the museum to visitors, Namou and her team brainstormed ways to continue their work. They came up with the virtual discussion series, which has featured a new interview almost every week since June 2020. Namou interviews journalists, actors, academics, and other outstanding people who are knowledgeable about Chaldean history or the Chaldean community.

Finally, Namou said they are planning programming which will record the immigration stories of older community members in Sureth. They will be translated, captioned, and archived.

“We want to plant seeds about who the Chaldeans are, everywhere,” Namou said. “Our goal is to use the funding to plant seeds of the history, culture, and language of Chaldeans so people become familiar with us.”